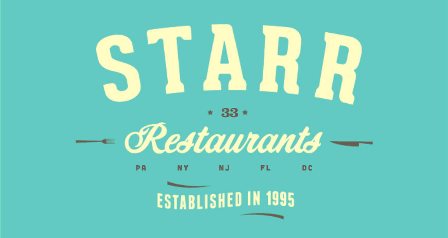 Founded in 1995 by Stephen Starr, Philadelphia-based STARR Restaurants is one of the fastest growing multi-concept restaurant companies in the country. STARR Restaurants include Buddakan, Morimoto, The Continental, Barclay Prime, Continental Mid-Town, El Vez, Jones, Alma de Cuba, Pod, Parc, Butcher and Singer, Pizzeria Stella, El Rey, Ranstead Room, The Dandelion, Talula’s Garden, Frankford Hall, Il Pittore, Route 6 and seasonal food-stand SquareBurger in Philadelphia and Morimoto and Buddakan in New York City's thriving Meatpacking District. STARR Restaurants expanded to Atlantic City, NJ, with Buddakan and Continental restaurants at the Pier Shops at Caesars in 2006 and to Fort Lauderdale, opening Steak 954 at the W Fort Lauderdale in 2009 and most recently Makoto in the Bal Harbour Shops in Miami. Stephen STARR Events is the group's full-service catering and special events division, managing projects including Granite Hill at the Philadelphia Museum of Art, Rat's Restaurant at Grounds For Sculpture, Caffè Storico at New-York Historical Society, and Serai at the Rubin Museum of Art.

Stephen Starr has earned numerous awards and accolades, and was named “Restaurateur of the Year” by Bon Appétit magazine in 2005 and Zagat Survey New York City in 2007. Starr also received the TimeOut New York Readers’ Choice Award for “Best New Out-of-Town Restaurateur” in 2007.